Clint Frazier couldn’t wait to show off his latest piece of lumber.

Featuring a colorful caricature of his face, his bright red curly locks, a face mask with his jersey number — 77 — a chain and sunglasses, his new bat was everything a typical brown, gray or black bat was not.

Frazier posted a short video of it on Twitter late last month, along with the now-classic Major League Baseball marketing slogan: “Let the kids playyy!”

The New York Yankees outfielder would show off the bat again later during BP, one of a growing number of artfully designed sticks seen at major league training camps this spring, wielded by some of the game’s biggest names.

Two days before Frazier’s post, the Philadelphia Phillies had tweeted a series of photos of six-time All-Star Bryce Harper using a similar bat, his adorned with a painting of the Phillie Phanatic.

San Diego Padres franchise player Fernando Tatis Jr. has been spotted with his own customized version, and Chicago White Sox shortstop Tim Anderson has an order on the way.

The eye-catching, custom-painted bats come from Victus Sports, a wood bat company based in King of Prussia, Pennsylvania. Acquired by Marucci Sports, the most popular bat supplier in the major leagues, in 2017, Victus Sports has been making bats for big leaguers since 2012, but it took a leap forward last year when it hired artist Bruce Tatem.

“We’ll get some feedback from players, things that they like, maybe something that represents where they’re from, stuff along those lines,” Tatem said of the design process. “Then I’ll either start sketching or we’ll be together in our design meeting and we’ll go over the ideas and we’ll throw ideas out there. I just take a collection of all that and then I put it into the computer and start mocking the bat design up. Sometimes, I’ll just run with it.”

Tatem, 44, spent more than 20 years airbrushing everything from motorcycles to hockey goalie masks before embarking on his projects with Victus Sports, with his first personalized bat going to former major leaguer Jonny Gomes. Tatem, a native of Biglerville, Pennsylvania, and a graduate of the Art Institute of Philadelphia, was initially skeptical of the baseball bat as a canvas.

“At first, it was like I’m working on a completely round surface, but I love that you can roll the bat and reveal the art,” Tatem said. “It’s not like the side of the motorcycle where you see everything at once. I love the way that the canvas works. I think I’ve figured out the puzzle with how to do that and make it look like an attractive piece of artwork.”

Tatem works closely with designer Ryan Smith, better known as Diesel. Together, they can create a bat in as little as a few days or as much as a few weeks, depending on the project. The company, which made about 20{397f7d3bf28e79e4b04697a61c19976344b6039fc71c31bcb0404a4bd2f8b6ab} of the bats used on Opening Day last season, can produce 100 or more bats for special events like Players Weekend, the league’s annual player personality showcase. That can create a time crunch, with artists working on bats for 72 straight hours without sleep.

“When Diesel was working on the Home Run Derby bats and the Players Weekend [bats], sometimes you don’t know until the last minute who’s going to be in the Derby,” Tatem said. “So you have no choice but to pull the all-nighter to do that.”

Among the group’s most recent projects was Tatis’ customized lumber, following his breakout campaign in 2020.

“We weren’t necessarily a hundred percent sure how we wanted to convey it,” Tatem said. “We just knew we wanted to do a bat. It was going to be a limited edition Tatis. So throwing the ideas out there, one of the guys was like, ‘Well, can you do blond dreads on a bat?’ and I didn’t say anything, but it stuck in my head, and I went home that night, I said, ‘You know what? I think I want to do a bat head of Tatis.'”

As usual, Tatem laid out the project on his computer, figuring out the proper dimensions for the portrait before he began a little bit of freehand airbrushing. Using an image of Tatis, he drew the player’s likeness onto the bat, then printed stencils and airbrushed in the finer details. From there, the bat went to the paint team, who finished off the bat before sending the special project to the Padres shortstop.

“When [Tatem] first came on, that was when we first decided, hey, we have an opportunity now not to just do crazy colors and dipped bats, but now we can actually do art on the bats, and I think that’s kind of the direction now that we’re pushing and I think it’s one of those things where we want to claim the trophy of being the best at it,” said Victus Sports CEO Jared Smith. “We want to keep pushing the envelope so that nobody can catch up to us really because you start seeing other companies out there, more and more doing stuff like us, and we welcome it.”

The company hopes to push forward bat design in the big leagues, but its work will be limited to social media posts, special events and batting practice — for now.

Rule 3.02 (d) of the MLB rulebook states “no colored bats may be used in a professional game unless approved by the Rules Committee,” but rules are meant to be broken — even if the league is trying to cut off a trend before it even starts.

Case in point: Harper, who has used the company’s more traditional line of bats in games for years. Five years ago, on the Fourth of July, Harper, then with the Washington Nationals, trotted to the plate with a custom bat, colored red, white and blue, and decorated with the stars and stripes and a silhouette of the Washington skyline, made by Chandler Bats. He promptly homered off San Francisco Giants pitcher Madison Bumgarner.

Harper got away with it, but a year later, his hopes of debuting a new patriotic Victus Sports bat for Independence Day — this one bearing an image of the Statue of Liberty — were dashed. On Instagram, he posted that MLB rules barred him from using it.

“One day I hope players in the @MLB can express the way they feel and give thanks to everybody that makes our lives possible and safe every single day through bats or cleats or anything to that point,” Harper wrote. “And no I will not be using this bat today to respect the rules of @MLB!”

At the time, MLB issued a warning to Victus Sports, reminding the company that its license to provide game equipment could be suspended. The league has softened its stance a bit since then, at least for the Home Run Derby and Players Weekend, when MLB expands its limited color palette for bats and permits logos and lettering typically prohibited.

That set up the company’s biggest moment in the spotlight so far, when Harper used a Victus Sports bat, decorated with “We The People” and an American flag, to win the Home Run Derby in 2019. “Ain’t no company that shows my personality in my bats more than Victus,” Harper said through a Victus Sports spokesman.

MLB began experimenting with nontraditional bat colors when the league introduced pink bats for Mother’s Day games in 2006. The league didn’t comment on whether there are any plans to further loosen restrictions on bat designs as it has in recent seasons by permitting customized cleats, but Victus envisions a future where colorful sticks are the norm.

“I can definitely imagine it. I would love that. Now, do I think MLB will do it? I hope so. I mean, I hope that they see the value in it. I think every sport you kind of go across the board, you see all the different things that are just expanding as far as customization and in the products,” Smith said. “If nothing else, I think they’ll continue to give us a platform to show the stuff off, at least in batting practice, hopefully with events like the Home Run Derby [and] Players Weekend.

“So now us being able to start doing some of this cool stuff for our players, the guys that we either have marketing deals with or just guys that have swung us for a long time that we really like, you’re going to start seeing more and more stuff like that out there,” Smith said, “at least unless MLB stops us.”

Fri Mar 19 , 2021
Products featured are independently selected by our editorial team and we may earn a commission from purchases made from our links; the retailer may also receive certain auditable data for accounting purposes. Picking a projector for a home theater or casual use usually requires a pretty annoying choice. You could […] 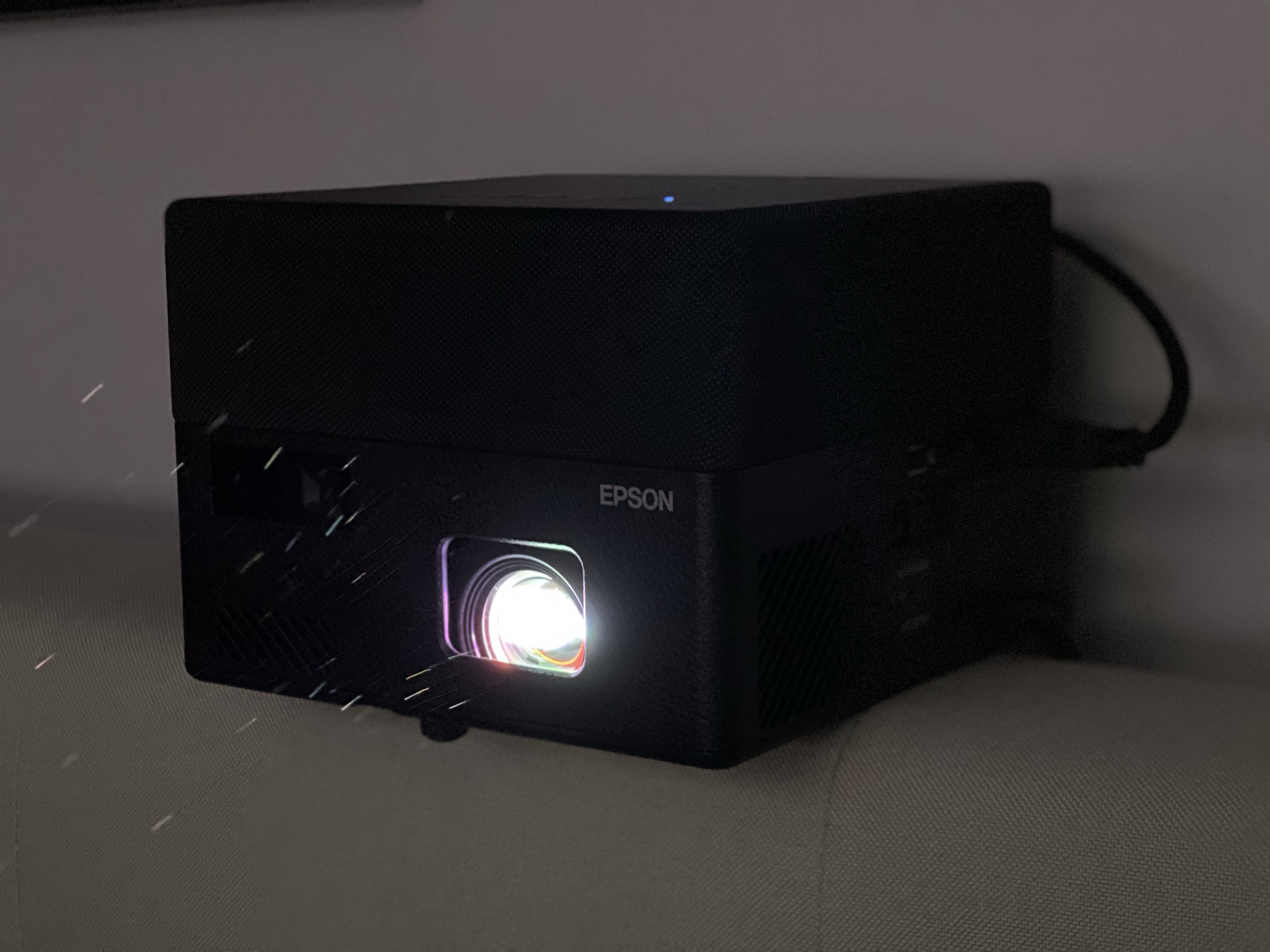