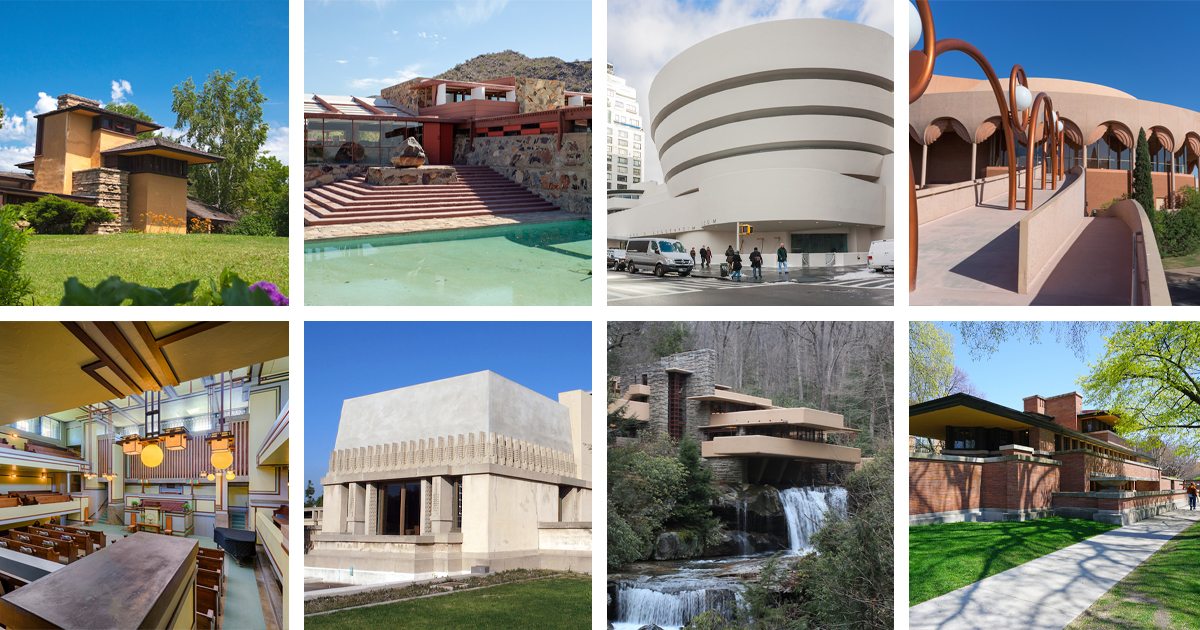 The legendary Frank Lloyd Wright is one of the most famous architects who ever lived. He left a legacy of over 500 built works, over 1,000 conceptual designs, and a legion of followers who still design according to his principles. He is also arguably the most famous American architect who ever lived and is credited with developing the first-ever American style of architecture—the Prairie style.

Wright’s mother believed that he was destined to build incredible things. She decorated his room with architectural drawings and provided him with geometric toys to help his development. Wright would credit these toys and his mother’s predictions as his first introduction to design. “For several years I sat at the little Kindergarten table-top…with the cube, the sphere, and the triangle,” said Wright. “These primary forms and figures were the secret of all effects…which were ever got into the architecture of the world…these smooth wooden maple blocks… All are in my fingers to this day.”

Wright worked under prestigious architect Louis Sullivan before eventually leaving to pursue his own work. He quickly transformed the landscape of American residential architecture and made a name for himself. Throughout his nearly seven decades of practicing, he built across many scales of architecture. Wright even completed some of his best work years after the public considered him worn out and near retirement. The first of these shocking projects was Fallingwater, often considered to be his masterpiece. The Solomon R. Guggenheim Museum came soon after.

Today, Wright’s work is still considered to be some of the best truly American architecture in the country. Scroll down to see some of our favorite FLW projects and their importance to architecture. 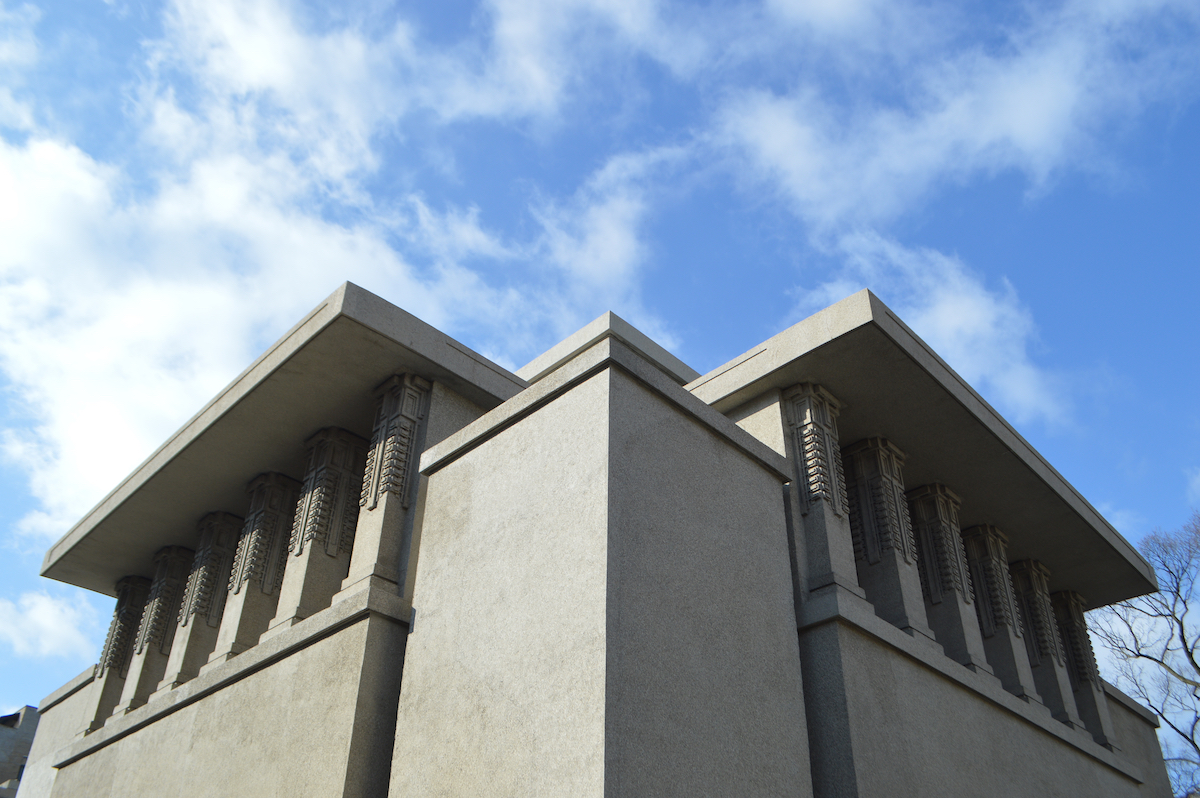 Unity Temple is one of the most important buildings on this list. It is sometimes called “the first modern building in the world.” It embodies many of the ideas that became staples of modernist movements that dominated the world of architecture and design in the 20th century.

Materiality plays an important role in Unity Temple’s modernist reputation. Partially from a very restrictive project budget, Wright chose to use reinforced concrete extensively throughout the project. The site was also a driver for design since the busy street and corner location made for a noisy challenge. Wright addressed the issue with heavy concrete walls with few openings. Instead, light entered through the square stained-glass ceiling. 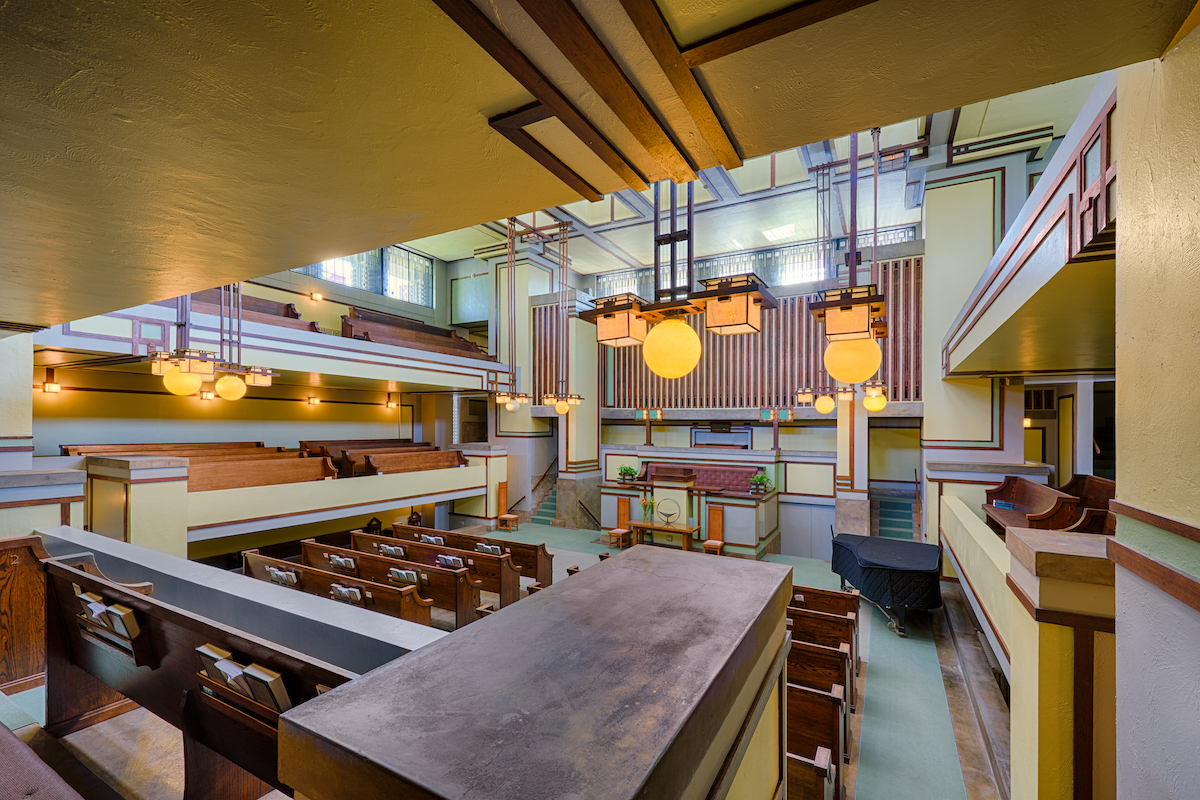 It is also important to note that Unity Temple shows a theme common to Wright’s architecture. He says that he first realized in this project that the building should focus more on the internal space, or volume, than the walls. His design carefully manipulates the internal volume that results from careful manipulation of walls and smaller interior details. 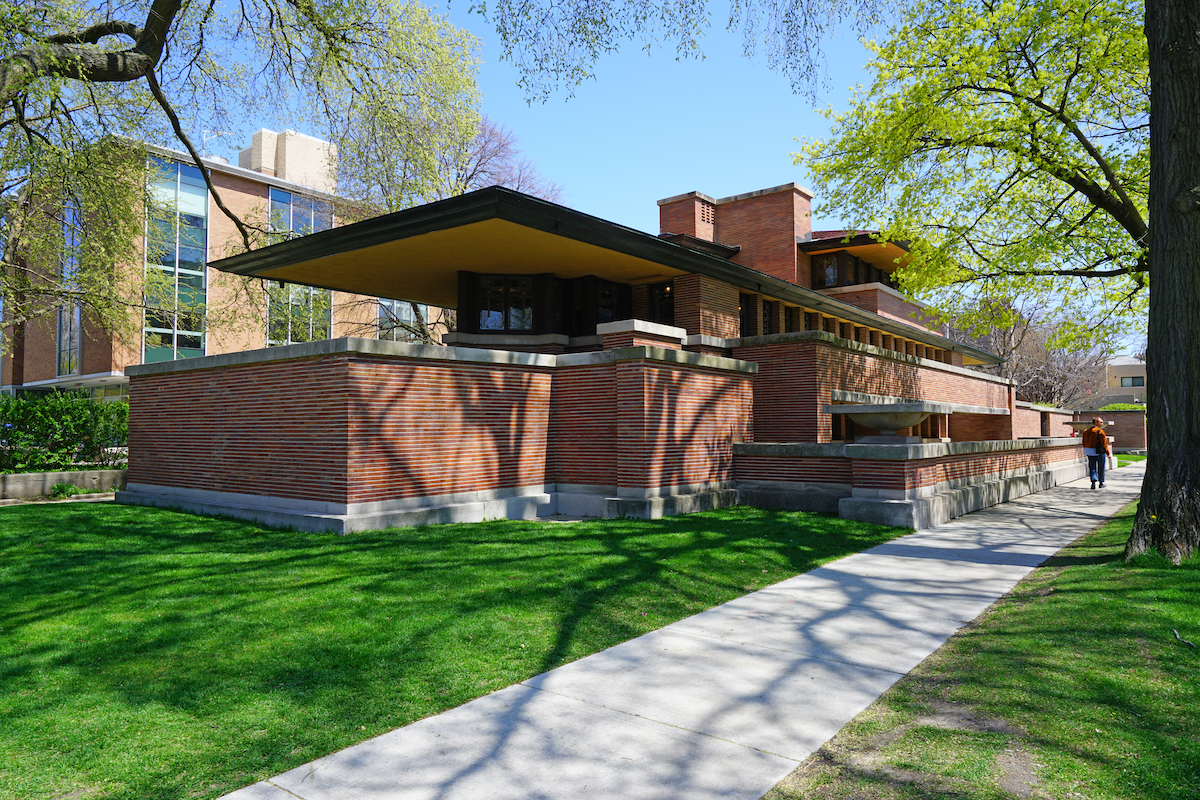 Robie House earns a place on this list because it is the perfect example of Wright’s Prairie style. This house marks the first-ever completely American architectural style. Wright did not necessarily know or notice that he had created the first style. Instead, critics began to understand the common themes that defined the style by studying his work. They learned that Prairie-style houses were inspired by the Midwest landscape and culture of the U.S. These houses also followed the German idea of Gesamtkunstwerk, or “total work of art.” In architecture, a total work of art means the design goes past the building to include furniture, lighting, textiles, and every imaginable piece of the interior.

Like many other buildings that define modernist styles—including the American Mid-Century Modernism—Robie House reinforces horizontality by shifting horizontal planes. Balconies, terraces, and large horizontal walls of glass blur the line between interior and exterior. His interior space centered around a chimney, which often symbolized the heart of the home. Much of the interior space was organized as an open plan and filled with the detailed furnishings and finishings designed by Wright himself.

Taliesin was the home, studio, and school of Frank Lloyd Wright. It is a massive 800-acre estate in Spring Green, Wisconsin that includes many Wright-designed buildings. It acted as a testing center for his architectural ideas and the place where his disciples learned his practices.

In reference to Taliesin, Wright said, “I meant to live if I could an unconventional life. I turned to this hill in the Valley as my grandfather before me had turned to America—as a hope and a haven.” 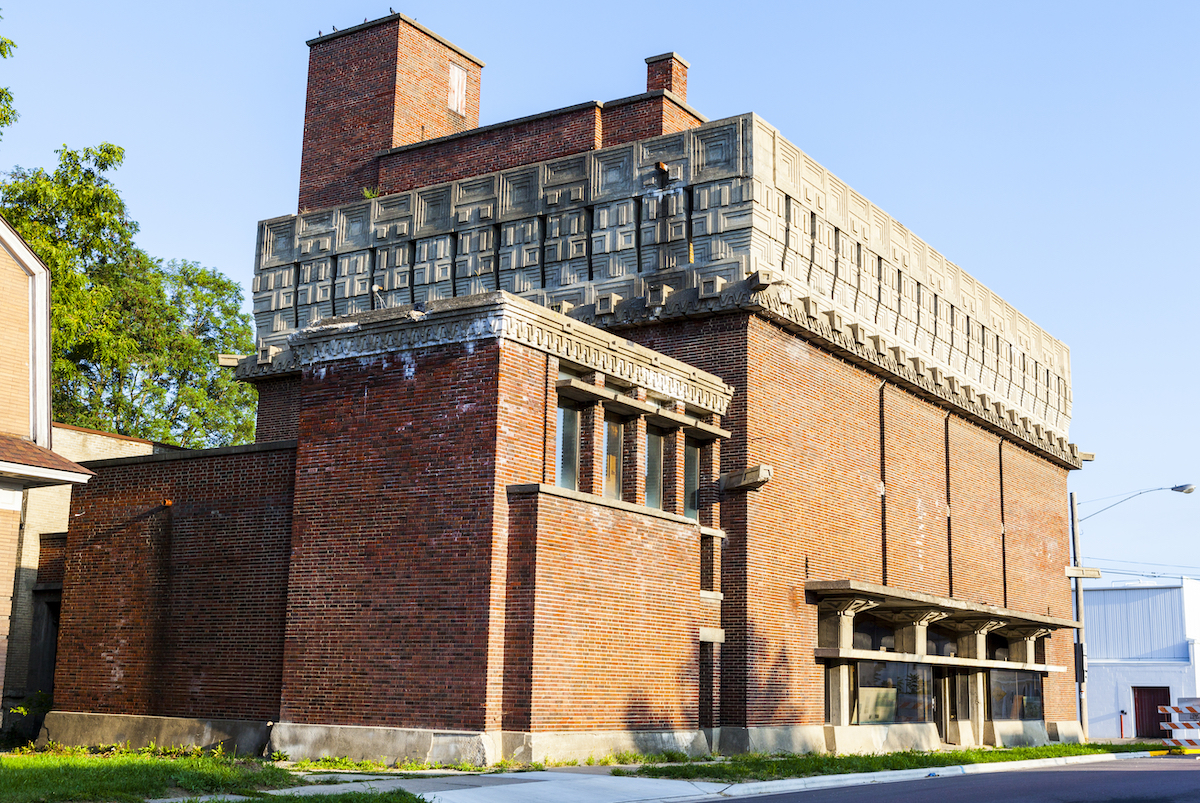 Albert Delvino German Warehouse, or A.D. German Warehouse is a Mayan Revival warehouse in Richland Center, Wisconsin. It was built in 1921 to act as a traditional warehouse to store goods, but was also designed to include a restaurant, retail spaces, a gift shop, and even an art gallery. The warehouse later even included a Frank Lloyd Wright-themed museum. The building is still available for public tours by appointment. 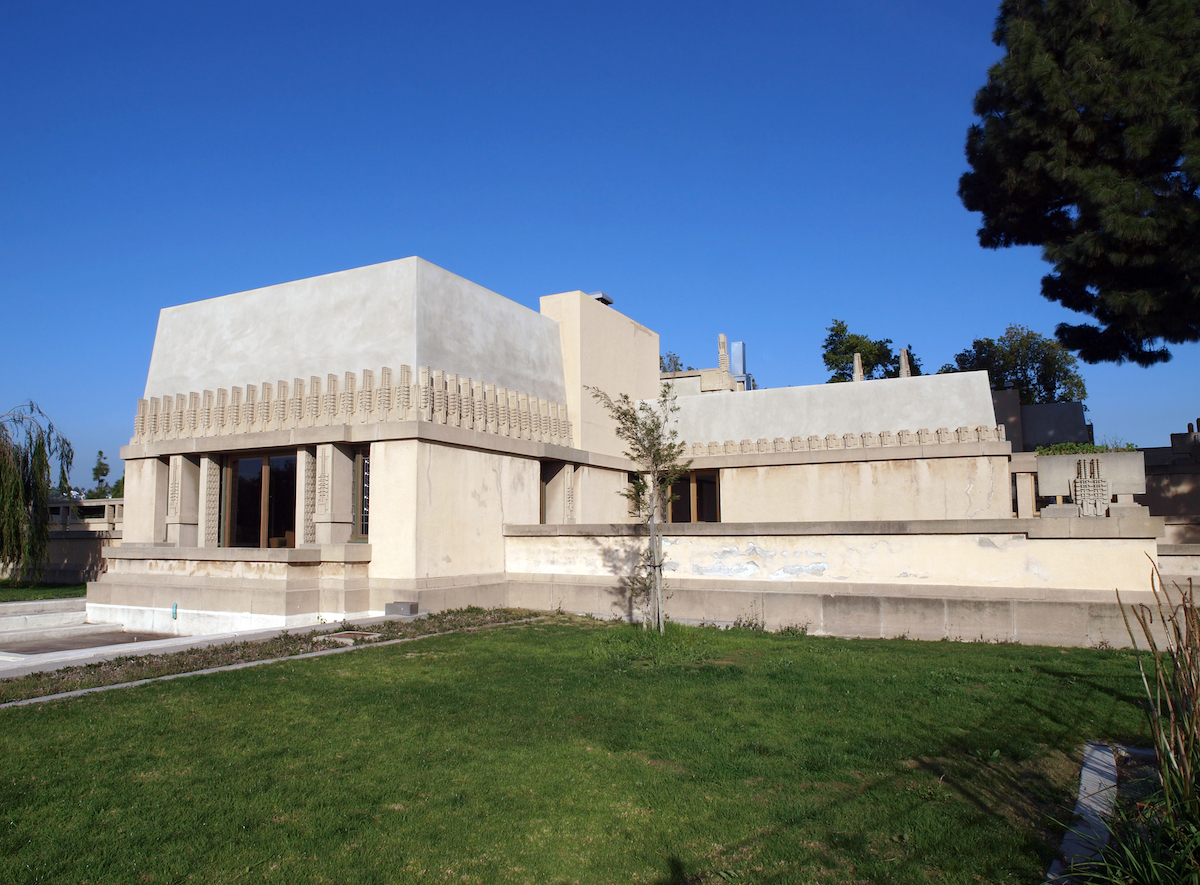 The Hollyhock House was designed as the East Hollywood home for Aline Barnsdall but is now the central building in Los Angeles’ Barnsdall Art Park. It is a great example of Wright’s Mayan Revival architecture. Features of this style include the oddly tilted exterior walls which lean back five degrees and the Mayan glasswork and concrete ornamentation. The Mayan-inspired details are typically abstractions of the hollyhock which was the client’s favorite flower.

Wright was not able to supervise much of the construction of this house because he spent much of his time during this period in Japan designing the next building on this list: Tokyo Imperial Hotel. 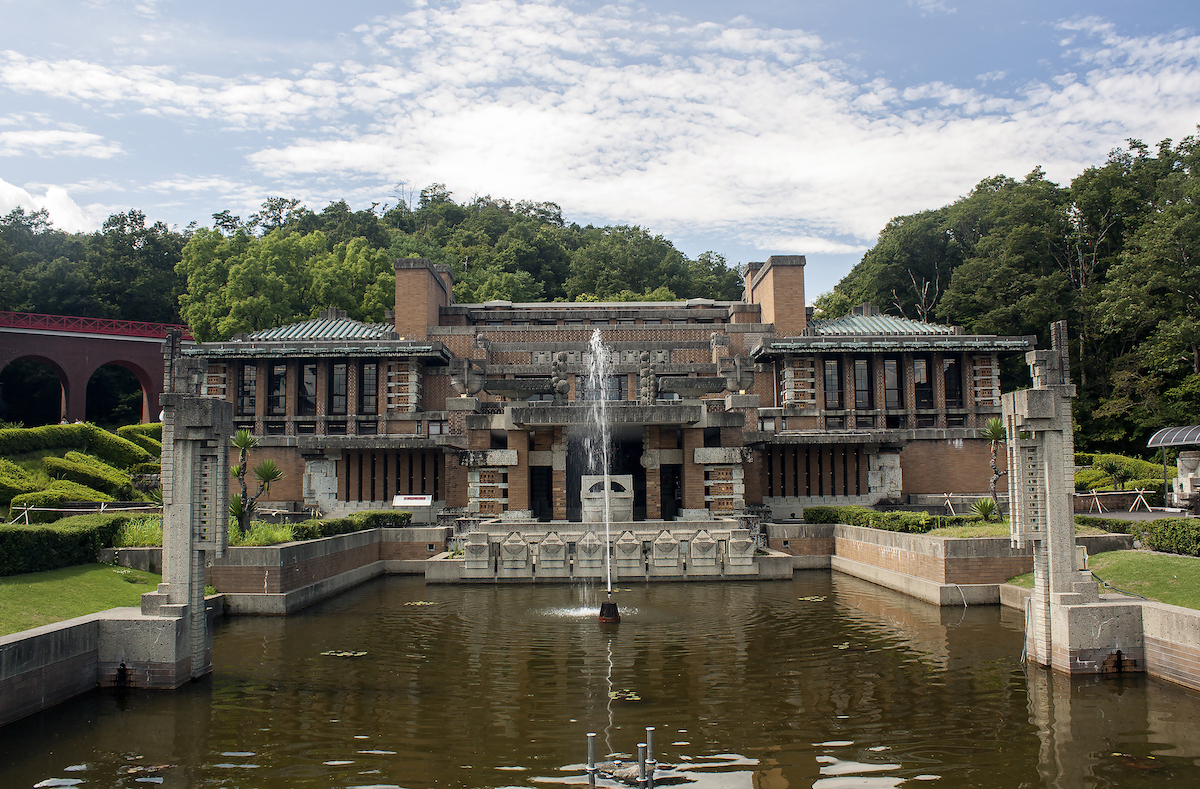 Wright designed two buildings as part of the Tokyo Imperial Hotel development. These buildings were the best known of his projects in Japan and were designed in the Mayan Revival style which resulted in pyramid-shaped towers with Mayan ornamentation. The buildings were mostly rendered in concrete and stone, making them appear monumental.

Wright’s work on Tokyo Imperial Hotel suffered many issues including partial destruction during numerous earthquakes and most of his work was eventually demolished. The most recognizable portion was the symmetrical lobby and the reflecting pool still remains. It was disassembled and rebuilt at Meji-mura—an open-air architectural museum near Nagoya. 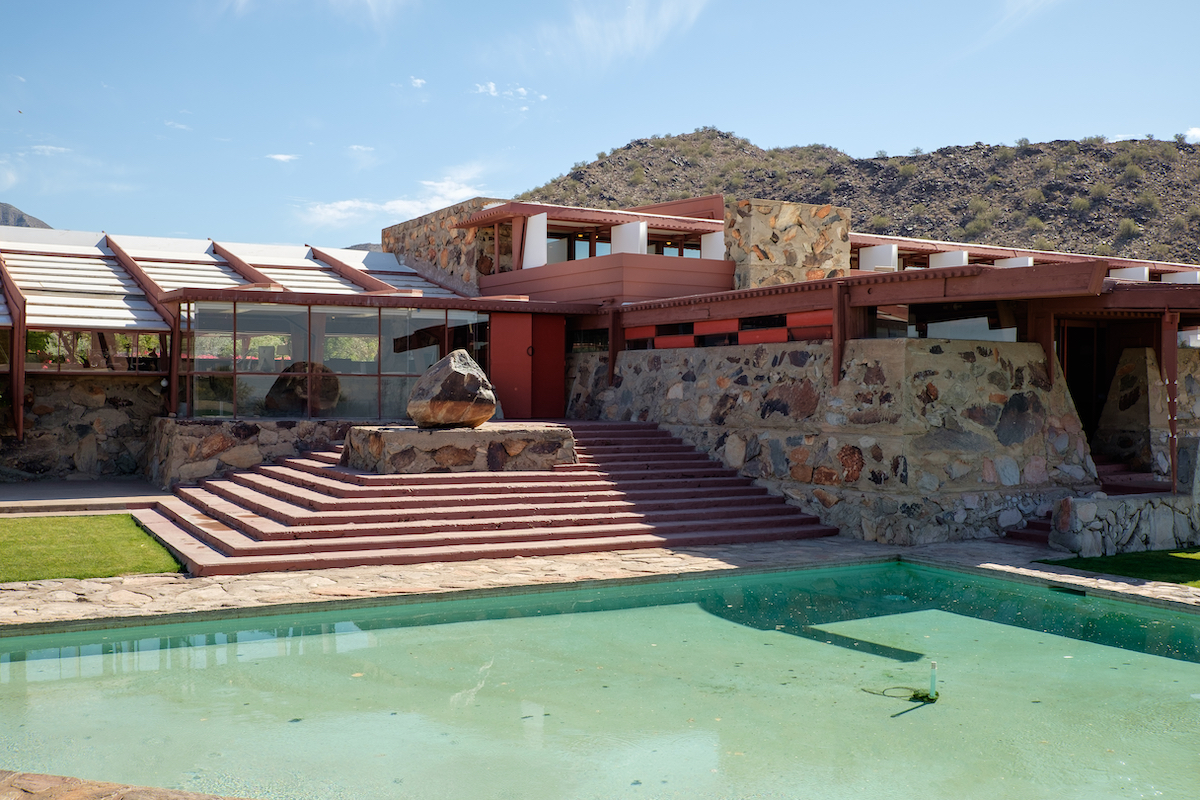 Taliesin West is located in Scottsdale, Arizona and served as Wright’s part-time residence and school. It is sometimes referred to as Wright’s desert laboratory because it is where he and his students tested architectural ideas. It may also have been one of Wright’s most beloved works as he and his students continuously maintained and added to Taliesin West throughout the years. 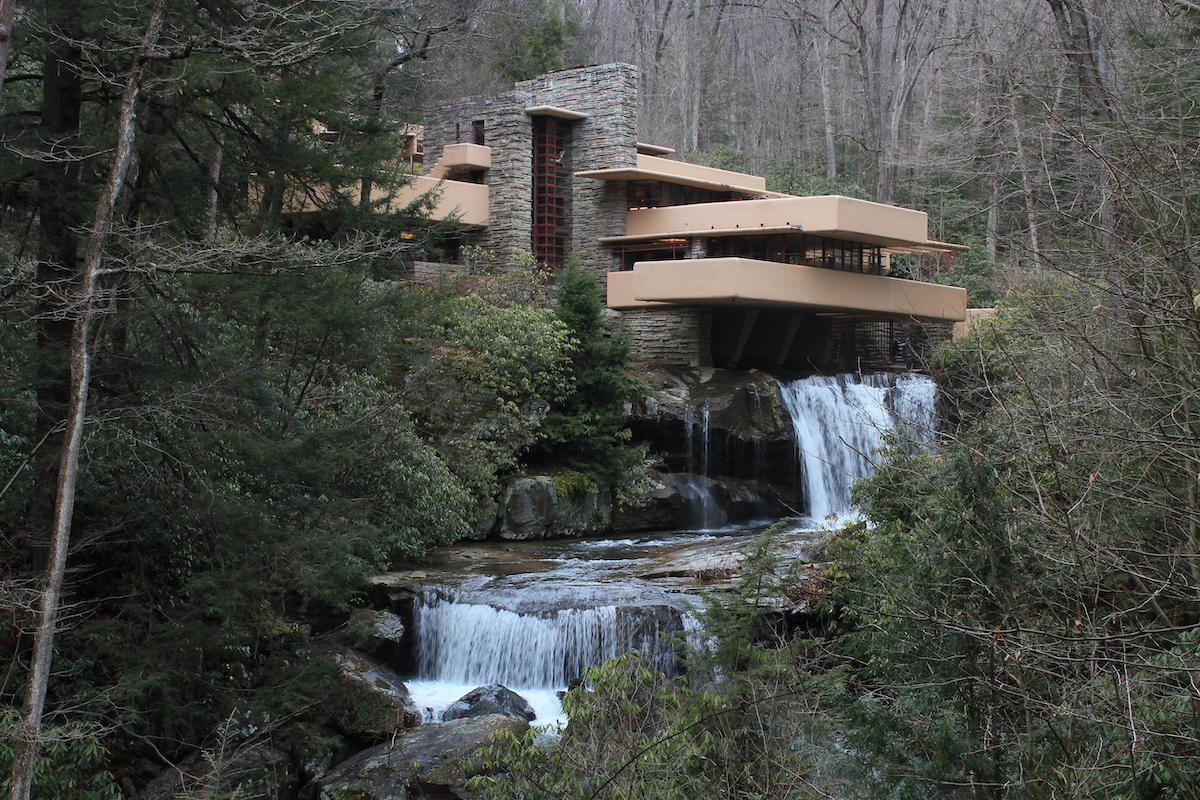 Fallingwater is one of Wright’s most recognizable buildings. Its place in history extends beyond architecture and depictions of the famed structure can be seen in movies, television, and even video games. It is one of the most important buildings in American architectural history and was considered by Time Magazine as Wright’s “most beautiful job.”

So why is this building considered to be such a masterpiece and why is it so different from the hundreds of other houses that the architect designed? The answer is because it seemed to perfect the ideas that defined all of Wright’s work. He believed architecture should enhance human’s relationship with nature, that it should blur the line between interior and exterior space, replicate the natural shifting forms of the natural world, mimic its materials and colors, and seamlessly blend into the natural landscape. If you study the photo of Fallingwater, you may be able to understand some of these qualities.

It was created for the Kauffmann family between 1937 and 1939 and proved that Wright was not too old to contribute to modern American architecture. When Kaufmann and his family asked for a weekend home with a view of the waterfalls, Wright decided to make Fallingwater a continuation of the home and designed the impressive cantilevering structure we know today. Structural issues followed over the years due to the ambitious design moves paired with Wright’s unwillingness to add additional support, but continuous maintenance has been done to preserve the building.

Shortly after the family entrusted the property to the Western Pennsylvania Conservancy in 1963, Fallingwater became a museum and still supports visitors today. 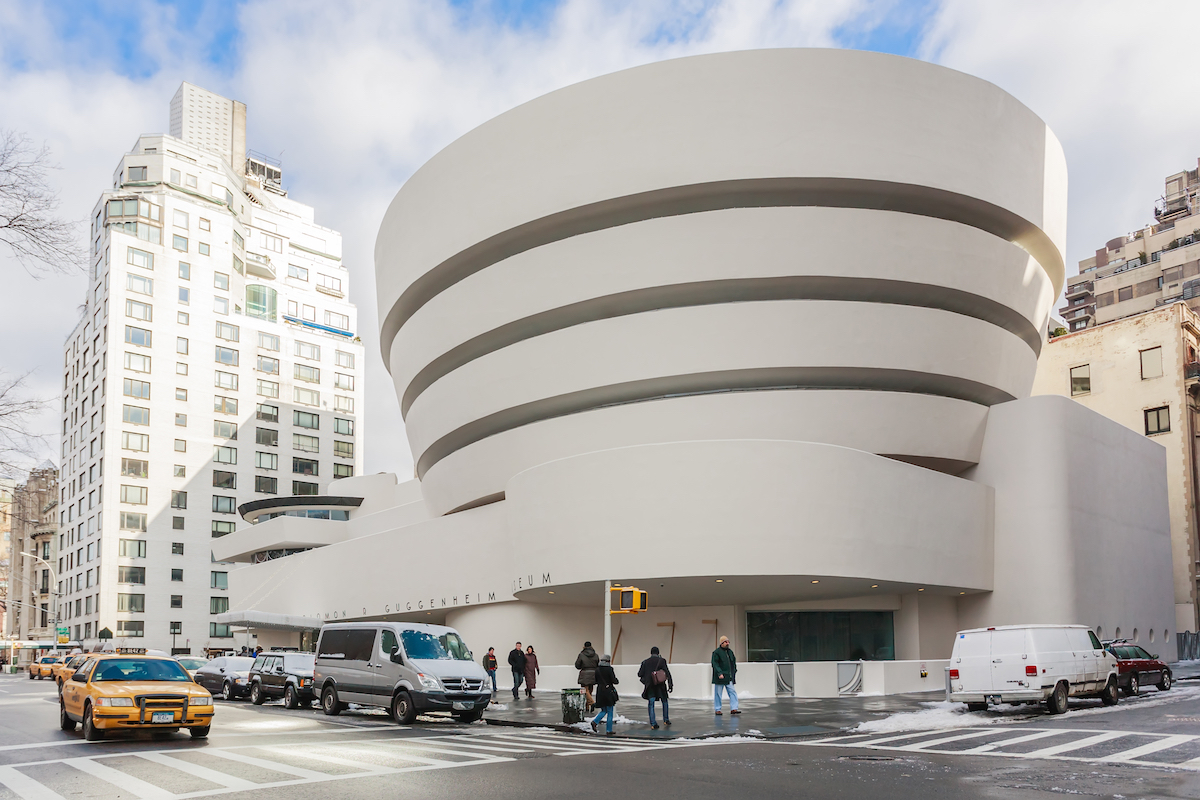 The Solomon R. Guggenheim Museum is one of Frank Lloyd Wright’s most famous works. It is also one of the last major projects he designed before his death and one of his most contentious buildings. Wright passed away six months before the Guggenheim officially opened in 1959.

The building is one of Wright’s most well-known projects because it is so unusual in form and so unique for its location and purpose. It is an unlikely form for New York City because, in the face of such a strict, grid-based city, Wright chose to design a spiraling and organically curving museum. The contrast between New York rigidity and the fluidity of the Guggenheim is just one reason the museum is such an iconic symbol for the building.

If you have visited the Guggenheim yourself, you may already know that the curves are more than an aesthetic decision. The curves act as a ramping system that allows visitors to circulate the museum and slowly make their way towards the top of the building. The ramping is the main point of contention that the Guggenheim faced in its early years. Imagine you are an artist and your work has been chosen to be displayed on the curving central walls. You may have two major complaints: your work does not sit well on the concave shape since it is not flat and your work is also not the center of attention—it is all about the architecture. For these two reasons, 21 artists sent a letter of protest complaining that their work was not adequately displayed.

The Guggenheim opened up common questions in museum architecture. Should the building act as a piece of art in and of itself, or does this distract from the pieces it is designed to display? Many critics believed that the museum had failed. However, many others today appreciate the Guggenheim as an innovative building that demonstrates Wright’s ingenuity and his personal style. 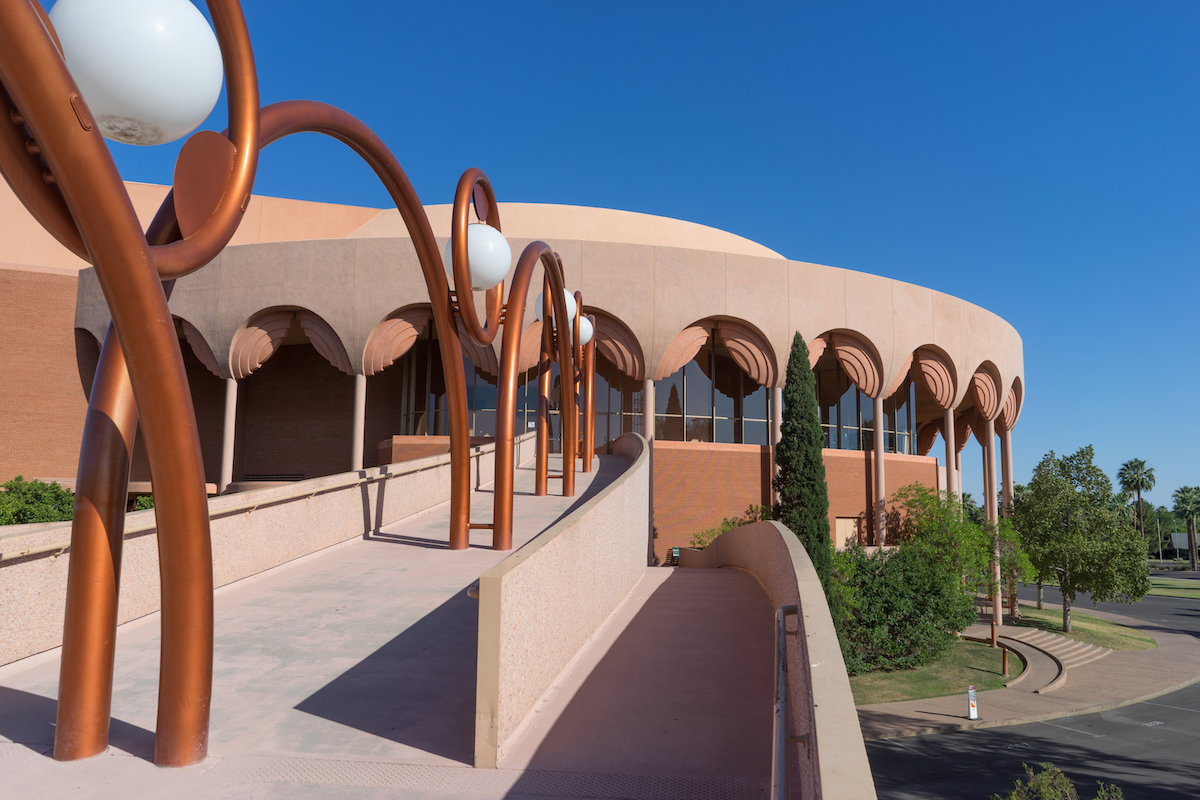 The Grady Gammage Memorial Auditorium was one of the last projects designed by Frank Lloyd Wright before his death in 1959. It was Wright’s chance to recreate the opera house he designed for Baghdad, Iraq which never came to fruition since the client, King Faisal II, was assassinated.  Wright decided to adjust this paper project for the auditorium. Gammage Memorial Auditorium features the same thin concrete columns and interlocking circles. Wright passed away during the construction of the project and the building was later completed by his student, William Wesley Peters.

Tips To Bring a Blueprint to Life

Thu Mar 11 , 2021
When you design your own home from the ground up, the sky’s the limit when it comes to design. You get to choose the architectural style, the floor plan, and all the flourishes that make this place uniquely, well, you. Sounds fun, right? It is, but figuring out what you […]