There are face scanners for guests to toy with inside the 52,000-square-foot exhibition space that immersive entertainment company Meow Wolf is opening Thursday in Las Vegas.

The bad news: The scanners don’t work with face masks.

But where others see restrictions, Meow Wolf tends to see opportunities.

The Omega Mart, located a few minutes off the Las Vegas Strip, aims to further Meow Wolf’s goal of marrying experimental art, theme park-inspired design and ambitious ideas on how we play in physical spaces. Depending on your perspective, Meow Wolf’s Omega Mart is an art gallery, an indoor theme park, a bold statement on individual theatricality, a place to take lots of Instagram photos or the sort of indoor space that should be avoided at all costs by the nonvaccinated during a pandemic.

It’s probably a mix of all of the above.

Meow Wolf’s foundational location, the House of Eternal Return in Santa Fe, where a suburban home constructed in a former bowling alley is a stepping stone to black-lighted, handcrafted forests that lead to glowing, prehistoric musical bones and intergalactic space stations, among numerous other oddities, was drawing 500,000 visitors per year before the pandemic. It remains shuttered.

But COVID regulations in America, of course, vary state to state.

Florida’s Walt Disney World has been open since last summer, whereas Anaheim’s Disneyland is unlikely to resume full theme park operations for months to come. In Las Vegas, Meow Wolf has the green light and is eager to show the world that it believes its vision for Omega Mart, a place where all-enveloping designs aim to turn the guest into a protagonist, is not just the future of themed entertainment but a locale that can respond to our troubled times even as it provides respite from them.

So no, you will not be able to take off your mask to play with Meow Wolf’s fancy new face scanners.

“If you’re wearing a face mask, it doesn’t perceive you as having a face,” says Emily Montoya, one of Meow Wolf’s cofounders and Omega Mart creative director. “We were like, ‘Are we taking this out? Can we fix the programming?’ We came up with an analog solution. You hold up a ping-pong paddle with the lower half of a face printed on it, and then it works. Then it perceives you as having a face.”

And in a weird, unintentional way, it may even better serve the Omega Mart message, a place that fuses old-fashioned illusions with modern tech to get us out of our own heads.

The Omega Mart is modeled to look like a typical grocery store, only here a deli contains a block of cheese molded after Edvard Munch’s “The Scream,” and another, Cheezus Christ, is designed to capture more religious imagery. Fridges storing drinks become winding passageways, T-shirt racks give way to hedge mazes, and soon we’re in multistory rock canyons with projected imagery, glass that seems to come alive with animation and corporate factories with double-helix slides and robot receptionists.

All of it taken together, for those who want to dig deep, is designed to have us think about who we are in relation to the brands and the corporations that seek to define us and our environment. That may be an oversimplification, and a relatively direct message for Las Vegas, but the wide-angled Meow Wolf Omega Mart look — part Andy Warhol, part childhood cartoons and part retro monster-movie aesthetics (pay close attention to the piñatas modeled after the seven deadly sins) — is meant to welcome us, and then unravel until we no longer have a clear sense of place.

“It’s all about reinventing the mundane spaces and trying to get you to reengage with a sense of curiosity and possibility to remember to wonder,” Montoya says.

“We have these signs in Omega Mart where it’s like, ‘Attention shoppers! Did you forget something? Don’t forget the ice. Don’t forget the butter. Don’t forget yourself.’ That’s the crucial thing to take away. We forget ourselves every day. We have the choice and the freedom to reengage with ourselves and the world around us, to remind us that we have the capacity to create infinite beauty and change.”

Meow Wolf’s Omega Mart concept has existed in various forms for more than a decade, but ideas surrounding the cult of shopping and the emotional manipulation that occurs in grocery store aisles hit differently today. The grocery store has become a so-called “essential” business, with all the tensions surrounding that, from disputes over pay for frontline workers to the idea that a place of routine is now a place of danger. Though Omega Mart has been in development for a number of years, turning a grocery store into a twisted, walk-around art installation in 2021 will likely bring Meow Wolf its share of criticism.

But context also matters, and Meow Wolf’s art is laced with humor — many of the products shown in Omega Mart, such as “Emergency Clams” or “Corn PM” can be bought as souvenirs — and underlying the entire exhibit is a giant game. While some of the products, such as Plausible Deniability Laundry Detergent, can be used as intended, they also double as set pieces that launch a not-so-hidden narrative.

“One of the things you might learn,” says Brinkerhoff, “is that most of the products have an ingredient included in them called ‘Additive S.’ As you dig into that, you learn that ‘s’ stands for source. And it starts to pull you into this larger narrative of the show, which is about ‘source energy’ being combined with these products to make them impossibly satisfying when you use them.”

Ask the robot receptionist about ice cream, Montoya says, and expect a hint about what to explore. One doesn’t have to play, of course, but think of Omega Mart as a walk-in video game, or, more accurately, a permanent installation designed to show the power of alternate-reality games.

“You’re brought into the world as yourself,” Montoya says. “If you want to dig deeper [into] what is going on with the story, you can obtain a card. This card is only meant for [Omega Mart] employees, and you can use this to go around to the points of interactivity. You’ll gain access. But you can also just not do that.”

Those who do will find a constantly evolving world, with art that responds to them. The idea is that the areas beyond the Omega Mart became stages, where guests and the art perform together.

Take, for instance, an area modeled after a factory.

“The whole point of the factory is that there are these instruments designed to extract a creative lifeforce and package it into a product,” Montoya says. “That can be a negative narrative, but this happens through play. You go down slides. You push buttons to activate giant light sculptures.”

Meow Wolf, like most themed entertainment spaces operating today, has outlined a deep list of safety measures and cleaning procedures, and will limit attendance to 25{397f7d3bf28e79e4b04697a61c19976344b6039fc71c31bcb0404a4bd2f8b6ab} capacity with timed entry. Staff will be on hand to remind guests of social distancing measures, and also will trigger some high-touch interactions. Montoya says Meow Wolf didn’t want to open with a diminished experience that kept certain activities off-limits for guests.

“The slide is a good example,” Montoya says. “How could we have this amazing double-helix slide that you can’t ride on? That would be a disappointment. For us, it was about finding clever ways to make things safe. With the slide, our facilities team came up with what is basically a sled, with sanitizer mist guns strapped to it. They send it down the slide, on a rope, and it sanitizes the entire surface as it slides down.”

That may not assuage everyone’s fears of avoiding an airborne virus, of course, but Montoya says Omega Mart will be in a constant state of flux and tinkering — something the Meow Wolf team knows well from making changes over time at its original House of Eternal Return. For Omega Mart, the former art collective is putting a hopeful spin on what it takes to exist in 2021: adaptation rather than compromise.

“We have this reality that we’re experiencing,” Montoya says. “The only way to solve this is to activate intense, insane creativity. Every limitation is an opportunity.”

Wed Feb 24 , 2021
Photo credit: Courtesy John Dinkel From Road & Track We lost Bruce Meyers. Yes, the Meyers with the S at the end of his name. The Meyers who designed the legendary Meyers Manx dune buggy, one of the most iconic, most recognizable, most fun and most copied designs in the […] 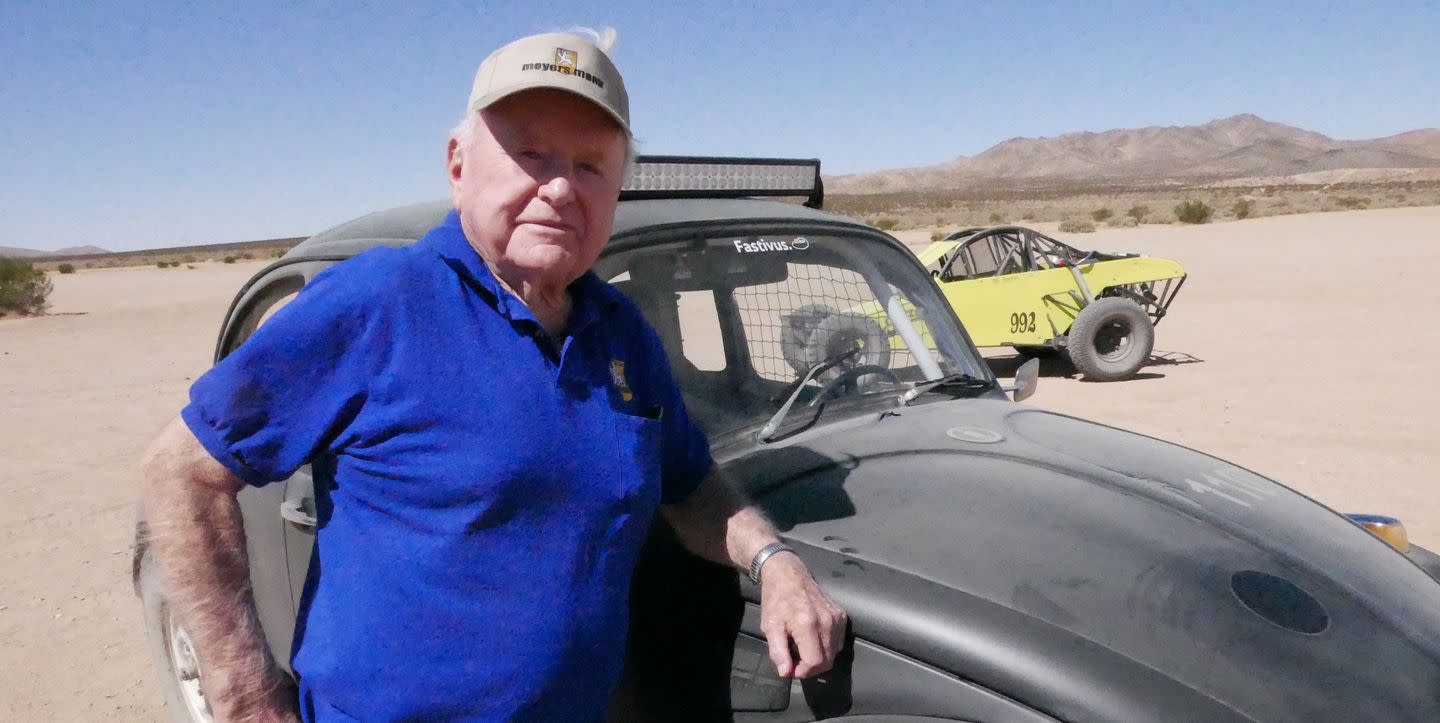